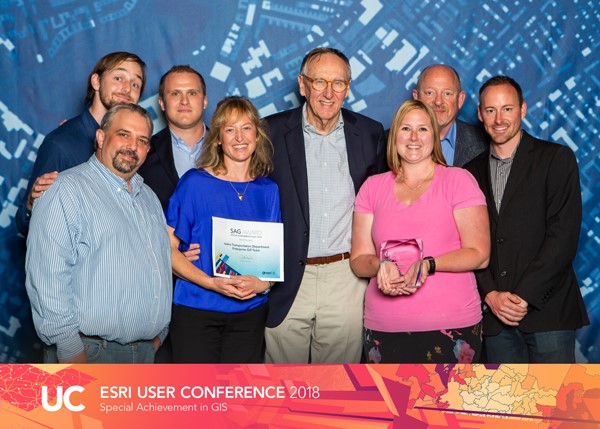 The migration of the department’s linear referencing system to a new platform earned the 2018 Special Achievement in GIS award from Esri, the world’s largest maker of GIS software. The team traveled to the Esri User Conference, held in San Diego in July, to receive the award.

Resource Data managed the upgrade, overseeing the schedule, deliverables, implementation, and cost. We ran a pilot project initially to show that Esri’s solution would work for ITD. We helped ITD users understand the impacts of the new system and how it would change the ways they worked. Ultimately, we took the system live 5 months ahead of schedule and 10 percent under budget.

The department moved from an older system that was deprecated and no longer supported by the vendor to the Esri Roads and Highways extension for ArcGIS. Resource Data’s Bill Fleming, who managed the project, said ITD began laying the groundwork for success years before the upgrade occurred.

“The GIS department at ITD had spent years on data cleanup in the system, which made it the smoothest conversion Esri has had,” Fleming said. “We had 100 percent transfer, so that shows the data was really good.”

The department migrated to Esri’s Roads and Highways product, allowing for new system integrations and easier management of road data, according to the award website. The migration helped streamline information-sharing with the Federal Highway Administration. The new system saves the time equivalent of one full-time employee, allowing staff to focus on other projects and fulfill requests from inside and outside the department.

ITD was also the first transportation agency in the U.S. to have implemented the ArcGIS portal alongside the new linear referencing system, Fleming said.

“That was big,” he said. “The work the GIS group here did was pretty phenomenal.”

Learn more about the Esri SAG award here.
You can view the maps here